The last quarter was terrible with the current pandemic for the mobile sector and the new industry survey reveals the mobile product company has lost just as much. The pandemic not only triggered a decline in mobile exports but also impacted device exports. Smartphone OLED screen shipments needed to 87 million units in the second quarter of 2020, UBI Research said on Monday.

It marks a 23.1 percent decrease from the same period a year earlier and a 17 percent decline from the first quarter of 2020. 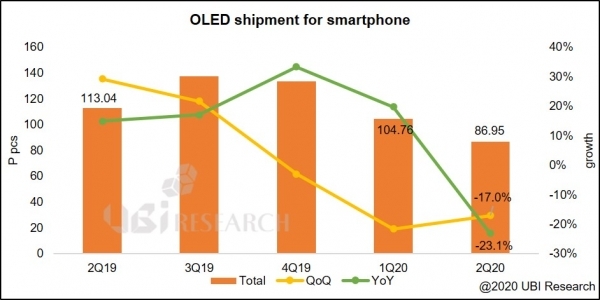 The study states that the decrease in rigid smartphone OLED panel shipments is the result of fewer mid-range smartphones being released in the second quarter of this year from the Chinese brands. The shipments for flexible OLED panels witnessed production, as they concentrated more on flagship-grade products.

UBI Research CEO Choong Hoon Yi said at the end of the study that Chinese OLED display technology has advanced and the price of Samsung OLEDs is being sold at 60 per cent. It was due to the Chinese government providing these manufacturers with subsidies to enable them to sell products at low prices.