Recently Snapchat has introduced a new group video chat feature, that allows users to chat with up to 16 of dearest friends. Other than that If users want more people to add in the chat, Snapchat is also now allowing them to make group voice calls with up to 32 people.

This new feature is very easy to use. To get started you have to just tap the video icon in a group chat, or start up a call with a few people and invite new friends to join. Snapchat’s crown jewel filters will also be available to use within a group video chat.

When you tag a friend, you have to start typing in “@,” spell out the username of the person, then tap on the name you want tagged. Participants who see the tagged snap will be able to swipe up and add the person as a friend or watch any public stories they have posted. The person you tag in your story, will be notified in the chat window. 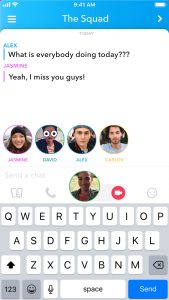 it’s worth wondering about the timing of this new feature, which comes almost two years after the company announced video chat. It’s possible that Snap wants to take advantage of the #deletefacebook movement offering people as much functionality as possible to connect on their platform instead of the incumbent’s.

Snapchat is more popular in the group of young age as compared to the mid-age people or above. Keeping this thing in mind Snapchat adds new features accordingly in order to keep engaged the people.