As we all know that the Snapchat is a multimedia messaging app that is used globally. It lets you easily talk with friends, view Live Stories, and explore news. Life’s more fun when you live in the moment that’s what Snapchat provides you. The best thing to make your life more interesting is to change the user interface and move around the new popular features. Last year when Snapchat made changes many users were upset with them. Some of them even posted a petition online demanding Snapchat to reverse the changes. We have a great news for Snapchat users. The previously announced version, dubbed as Snapchat Alpha for Android is on the way.

Snapchat’s new version of the app will be faster and smoother. There will also be some design changes. The friend’s list will have a black navigation bar. Moreover, the icons will be more polished. The new Snapchat stories menu will look more like the Instagram Stories menu. Let’s have a look at some of the changes in the design of upcoming version. 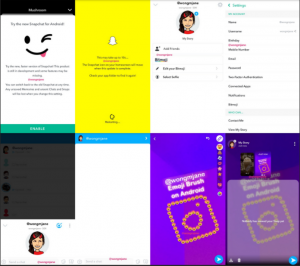