Snapchat tests a new TikTok duet-like feature, which allows users to respond to friends’ snaps by recording their own snaps, this feature called a remix. This new feature allows Snapchat users to remix the stories of friends and allows users to choose various layouts. Currently, the feature has been tested and an app researcher has found it. Users can create a story and can tag their friends to show them how creative they are for them. Snapchat currently tests the Remix feature, but when the company will introduce the feature for users it is still not clear.

Checkout: TikTok Ban in Pakistan: Is it Good or Bad?

#Snapchat is working on the possibility of remixing friends' Stories 👀

ℹ️ You can choose between different layouts to create your snap. pic.twitter.com/VJcEtMc9Ea

Snapchat users can duets like TikTok, post their stories, turn on a toggle so that friends can remix and upload their duets, and also can tag their friends. Users can allow their friends to duet with their snaps and can see who can better remix their Snaps. For the recording of their Remix videos, users could choose either a side-by-side, a top or a bottom, or a picture layout. 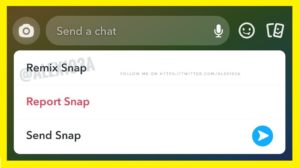 According to reports, the Remix feature may make it to other parts of the app, including the Spotlight feature. The Spotlight feature was released to compete with TikTok in November last year. This feature enables snapchatters, unlike normal Snapchat, to create a picture or video content that can be shared with others using the social media platform.

Snapchat, the Social Media application recently introduced a new feature, allowing Snapchat creators to disclose their number of subscribers if they like. This feature enabled on both users with public profiles or businesses. This feature will be available globally soon. In addition, Snapchat introduces music on its platform and jumps in the same boat with other social media platforms like TikTok and Instagram. Users can choose music from a long preselected music list in the app. During or after making their snaps, users can add music same like TikTok.

Also Read: How to Get a Snapchat Streak Back? Recover Lost Snapstreak!