Finally, Snap is ready to compete with TikTok and pays designers to post on the platform. The company has officially announced today a new section of Snapchat, named Spotlight, which will cover the vertical video content of users that are more memorable and playful rather than the day-to-day content previously promoted by Snap.

Spotlight seeks to extend the interactions between Snapchat users by encouraging everyone to make a video on the app. It seeks to motivate more users to make “snaps” videos that can be enhanced with filters and increased reality effects.

“We designed Spotlight to entertain our community while living up to Snapchat values, with our community’s well being as a top priority,” said a statement from Snapchat parent firm Snap Inc. announcing the new service.

In the US, Canada, Australia, NZ, Ireland, Norway, Sweden, Denmark, Germany, and France, Spotlight will be introduced and later on in many other regions. This creates a new threat to the wildly succeeded TikTok, who, because of national security issues about its Chinese linkage, is faced with pressure from the Trump administration, which wants to ban the application or push its sales to American investors. Facebook-owned Instagram rolls and startups like Triller are also seen in related short-form videos. 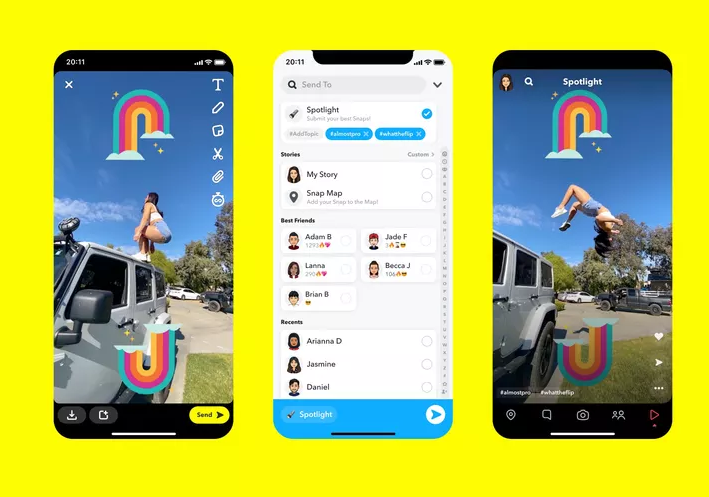 Snap describes Spotlight as a “new consumption experience” for the social platform at the end of September, with an estimated 249 million active users. The company said that the new deal would encourage millions of users to view their videos and potentially make money from them. This is the path to become an “influencer” who is eligible for Snapchat’s funding of some $1,000,000 a day from Snapchat.

In comparison to competitors with automated systems, which in most cases respond to inappropriate material and misinformation, Snap also said that human moderators check all the videos on the spotlight before being shown on the app. The lack of public feedback on the Spotlight would also eliminate the need to moderate abusive or inappropriate posts—another difference.

Spotlight intends to become a “personalized” feed focused on user viewing preferences, curated by an algorithm change following TikTok’s lead in recent months with sizzling progress. The launch takes place in the sense of increasing rivalry between social networks and competitors who duplicate the disappearing messages of Snapchat.

Facebook’s core social network has been losing ground for rivals such as Snapchat and TikTok among young audiences even as in that age category, the Facebook-owned Instagram continues to expand.