Chairman of Pakistan Tehreek-e-Insaf (PTI) and former cricketer Imran Khan’s marriage with Bushra Maneka is the hot topic of the day and the wedding is being discussed on social media. Social Media Exploded with Jokes and Memes after Imran Khan’s 3rd Marriage

The news of third wedding of Imran Khan broke the Internet. First time news was broke out on Twitter by tweet on PTI’s official Twitter account on Sunday. Burshran Maneka is a faith healer and she was Imran Khan’s spiritual adviser. But so many people made fun of Imran Khan on his third marriage.

The party issued pictures of Imran’s nikah with Bushra Bibi, in which close relatives of the bride could be seen. After that so many posts have been seen on different social media platforms regarding the issue. On some Platforms the third marriage was discussed critically while we have also found supporting messages and best wishes for Imran Khan.

A month ago social media was on fire to hear the rumor of third marriage of PTI chairman. While at that time PTI party has rejected all the claims, when the news first broke. However a day later PTI leaders revealed that Imran Khan has just sent a marriage proposal yet to Bushra Maneka.

But now those rumors have turned into reality and PTI party has given the confirmations along with proof by issuing the pictures on social media. And people have started making jokes and memes on different social media platforms.

We have found some memes regarding Imran Khan’s marriage on social media. Here are some Tweets. 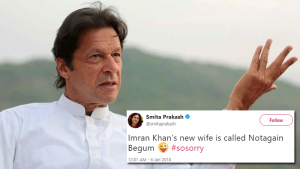 So shocking for some: