Your doctor is complaining about you on Facebook
Salon.com said that according to a recent survey of over 4,000 physicians showed that 67% use social media in a professional capacity. Many write blogs or use Twitter to broadcast their insights and opinion to a wider audience. Others have posted videos on YouTube. They are leveraging the strengths of social media: a fast, free and open channel of communication that is easy to use.

The ages are gone when a doctor may have opened his clinic by placing a board and introduce him by giving talks at hospitals, clinics and medicines. Today, a doctor takes social media, post similar information to his or her Facebook and Twitter followers.

A more obvious benefit of healthcare social media is as a platform to inform patients and the public during disasters, emergencies or public health outbreaks. Twitter has created example in past, as many physicians can tweet to inform that the vaccination is available, or that there’s been an outbreak of swine flu or dengue at a local school. 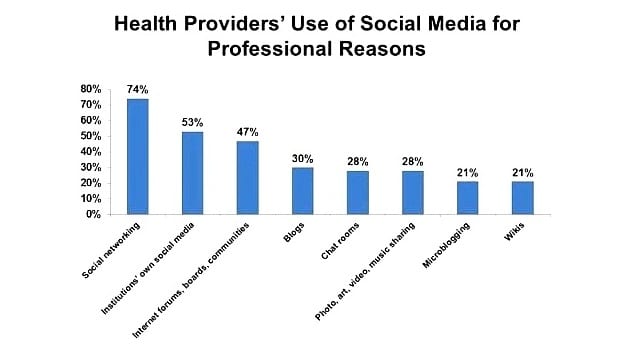 Social media has the ability to communicate broadly and with masses, it doesn’t matters how many patients you have, there is nothing effective & efficient about using social media. Less trendy communication channels, like email or a phone call, hold much more promise when it comes to keeping our patients healthy.

But this issue is quite sensitive, that what type of information should be posted on social media.
[list style=”list1″ color=”blue”]

[/list] Finally, there’s the quack factor. Social media lacks the fact managers and editors to create a balance between the writer and the audience. But in this age of social media, the blog, tweet or YouTube video have no boundaries. [blockquote cite=””] To help counter the chances that doctors will mislead the public, a lot of hospitals and professional groups have issued guidelines for how physicians and other health professionals should use social media. The American Medical Association, for example, recently created guidelines for the use of social media.
[/blockquote]

We are still wondering if these policies will ever have any significant impact on how doctors use social media. There’s great enthusiasm for its openness and ability to connect with patients and consumers. But there’s also great skepticism about its true value in keeping patients healthy and educated. Either way, healthcare social media isn’t going away anyway!