Sony Xperia XZ is a great handset offering everything you want to get in any flagship smartphone. It is a dust proof and water resistance device with big screen of 5.2 inch touch screen display. Today we will discuss the specifications and features in SONY XPERIA XZ Review.

Sony Xperia XZ is powered by 1.6GHz quad-core  which is integrated by single SIM or dual SIM. The gadget comes with 3GB RAM and 64GB ROM of internal storage, which is expandable upto 256GB  with the access of memory card. The camera section packs 23 MP lens of rear camera while 16 MP lens of front camera for best picture quality. It runs android version of 6.0 (marshmallow) which is upgradable to v7.0 (Nougat). Power house carries massive battery of 2900 mAh.

Sony Xperia XZ is packed in elegant rectangular box very beautifully. You can find all the basic information about Sony Xperia XZ at the back of the box. Necessary accessories are available inside the box such as headphones, USB cord and charger. 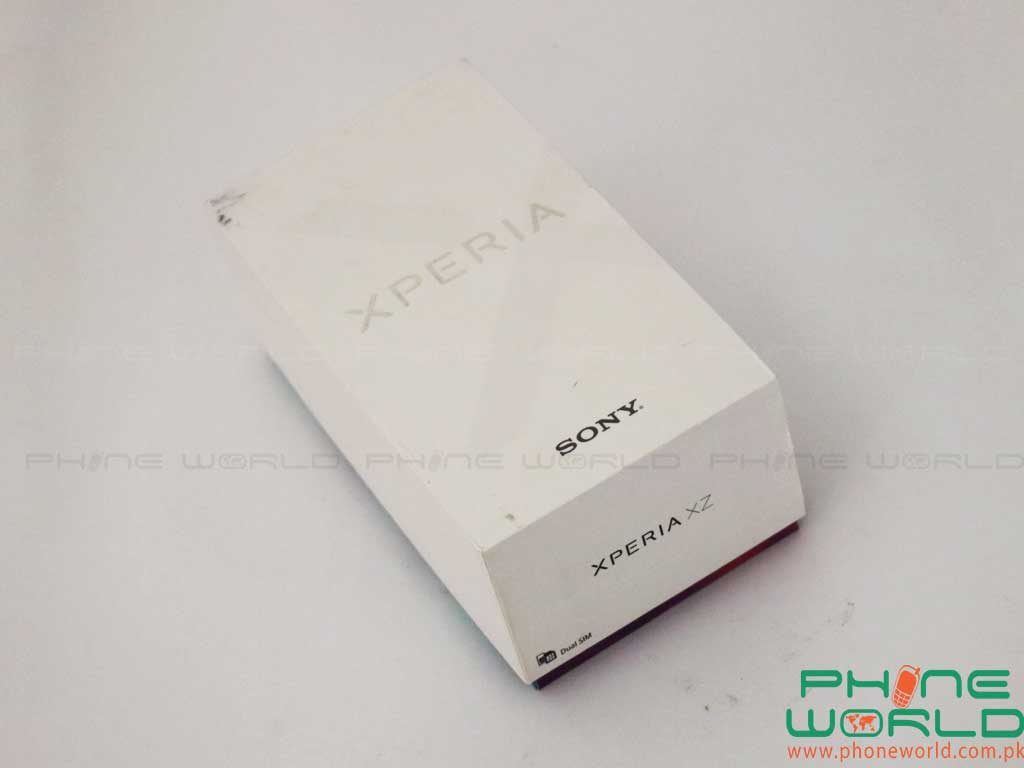 Sony Xperia XZ is going to satisfy you by its battery life. The 2900 mAh massive battery will make the users happy by providing them 6 to 7 hours of talk time and 12 to 13 stand by hours of usage. Sony Xperia XZ has fast charging tech, so it won’t take too long to charge up.1.5 volt of charger will charge the battery in 2 hours approximately.

Sony Xperia XZ has wonderful display with supportive resolution of 1080 x 1920 Pixels.  It carries 5.2 inches screen with 70.9% of screen-to-body ratio. The gadget supports graphic card of Adreno(TM)530 while the display has 480 dpi pixel density for the visibility of texts and icons.

Sony Xperia XZ has quite bright and big screen, which makes it great choice if your are watching movies. You will find movies applications for playing movies and videos, it provides TV programming schedule too. You will also find Google Play Movies and TV on the phone. Stereo effect is also good when watching a movie. This phone has good audio quality. As the memory is not that much good because it has only 3GB RAM but that is not an issue we can increase the memory  upto 256GB by microSD Card, that’s why phone will be able to handle any game you want to play on your phone.

The boxy design with slightly rounded off edges give nice look and enable this phone sits comfortably in your hand. It is easiest to handle.The top and bottom edges are flattened off with a premium feel. On the top there is 3.5 mm headphone jack. You will find USB-C slot on bottom while microSD and SIM cards are present on left side.

On left hand side there are volume keys, camera button and power button. You will find dual speakers one is placed upside and the other one is placed on downside. On top of the front body there is 13 MP lens of front camera and notification light.

On back of Sony Xperia XZ is simple. 23 MP lens of rear camera is placed on top left. Below the camera lens there is sensor and flash light. Name of Xperia is beautifully marked on the middle of the back body. The dimensions are 146 x 72 x 8.1 mm and weight is 161g.

Sony Xperia XZ has 5.2 inch display which runs android version of 6.0(Marshmallow) that is up-gradable to v7.0(Nougat). Let’s have a look of interface.

On lock screen network notifications are present on the top. Below of it you will find time and date widgets. camera icon is present at the right bottom that’s why there is no need to unlock the screen when you want to operate the camera. You can see Mic icon on left bottom. To unlock the screen you have to swipe right.

After unlocking the screen you will find time and date widgets on the main screen. You will find some applications arranged in a sequence on the main screen. On the bottom ob main screen there are three working function keys. Sony Xperia XZ has file manager and file tray, where you will find all the applications. It has number of its own apps such as PlayStation, Xperia Lounge and Movie Creator. You will find a touch of bloatware too including Amazon, Kobo and AVG Apps, but you can delete them if you don’t need them or need some space. The interface of Sony Xperia XZ looks little smoother.

Memory of Sony Xperia XZ comes with  memory of 3GB RAM and 32/64GB ROM, which is considerably average.you can multiply the memory with the inclusion of microSD Card and that is expandable up to 256GB. You can  download games of your choices and can enjoy. when you download any game or application, you won’t face any lag on any stage.

Camera is a headline feature of Sony Xperia XZ. It comes with 23 MP rear camera lens and 13 MP lens of front shooter with advanced movement and color capture. When you take picture with it the life will look so beautiful as really it is.

The Sony Xperia XZ comes with 23 MP rear camera lens and LED flash light. It has a maximun aperture of f/2.0. The shots taken by the rear camera has minimum blur. It can allow you even moving objects. By using the auto mode you will get great looking shots. White balance accuracy has been improved in Sony Xperia XZ. It can record video in 4K. You will get best reults by taking pictures.

Selfie shooting is improved in Sony Xperi XZ. 13 MP front facing camera will give you perfect selfie. Image results are very impressive. There is an amazing mode ” wave to capture” which enables you to take picture without touching a button.

On the front facing camera you can capture the full HD video. Video calls will also look good when you take any video call on Sony Xperia XZ.

Sony Xperia XZ is 4G enaled device.  The device provides Wi-Fi and Bluetooth.  FM radio is not available. Wi-Fi has b/g/n standards and Bluetooth version is 4.2. It has dual sims option availability.

After conducting vellamo benchmarking test in Sony Xperia XZ the result we got are satisfactory.

Sony Xperia XZ is best premium handset, that is providing everything which you can expect from any high end feature  phone. Camera with high resolution will facilitate you to capture all the moments full of life.  Inertnal storage of 3BG RAM and 32/64GB ROM, expandable to 256GB, will give you enough space for downloading. 2900 mAh of battery will give you long stand by hours of usage. This premium handset will satisfy all your requirements which you want to have in any flagship device.