These days, every now and then we are getting new information regarding the upcoming WhatsApp features. It seems like WhatsApp is trying to change the overall interface, by including new features that are going to make the app better than before. No doubt, we totally understand it since when we keep on using the same app for a long time, we usually get bored, so to remain updated, the messaging app is trying to be better than before with each passing day. This time we have come across a new feature that this messaging giant might be launching for WhatsApp users in the coming months: The ability to upload media as a status update when sharing over the chat.

It means now when a user would be sending a photo or video to their friend, they would be able to directly put it on status along. Just a few days back we came to know that the platform is working on a feature that will let users edit media before sending them in chats. It seems that the new feature will be an extension to it. For this, WhatsApp is working for both Android and iOS updates that will bring this new feature along. But there is no specific time that when this feature will be made available to the users. 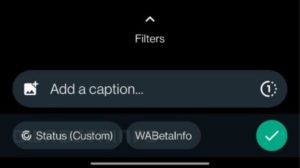 So soon when users would be sending a photo they will be able to choose a recipient for status as well. From this, users would be able to easily create Status updates of media content that they share with their contact on an individual basis.

While these changes are at work right now we cannot comment whether they will make up to the upcoming update or not. Let’s wait!