Google Assistant is also integrated into the Allo chat app, and its Google Home smart speaker range apart from phones. A developer has just spotted this new feature in android messages. Google is satisfied with its testing and soon it will be available for all Android Messages users. 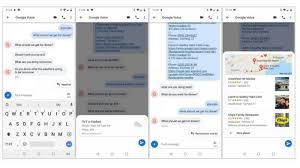 Kieron Quinn, a developer of Mighty Quinn Apps first enabled this support in Android Messages. XDA Developers also test it out. The developers ask Google Assistant to show the weather and recommend restaurants nearby and they got satisfactory results.

This works similarly to how Google Assistant works in Allo, but without the ability to talk to Google Assistant directly. Google has also confirmed few months ago that it is pausing investment in its Allo app, and is shifting the entire workforce to other projects and transferring all of the resources to the Android Messages team.

It seems like Google wants to get rid of Google Allo. The company has started to port over some of the features from Allo that include smart replies and the web client. Google has also confirmed that its long awaited RCS-based SMS replacement platform called Chat – a “carrier-based service” that will be turned on by default inside the Android Messages app.