The advent of the smartphone basically generated from the idea of a full touch screen. After a full touch screen was built, now the next task was to upgrade it. The first model of the touch screen was the Liquid Crystal Display (LCD) and it had a non-capacitive touch. Then advancements were made with the LCD. First, it was made capacitive. After which it paved the way for many more advancements. And now there are two categories of screens. One is the LCD and the other is LED. The most upgraded version of LCD is called In-plane switching (IPS), while the upgraded version of LED is known as AMOLED and Super-AMOLED. And my further debate will mostly be consisting of Super-AMOLED vs IPS LCD. Both have different pros and cons.

Therefore, today I am going to compare Super-AMOLED display with IPS LCD. 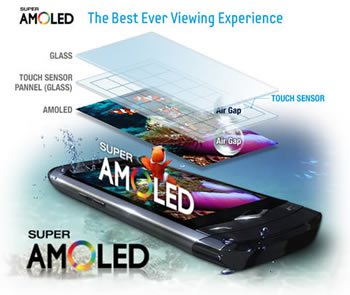 Super-AMOLED is basically an upgraded extension of AMOLED. So, first, I will explain what is AMOLED?

AMOLED stands for Active Matrix Organic Light-Emitting Diode. It is an upgrade to OLED (organic light-emitting diode). This technology uses organic compounds which produce or emit light when open to an electric current. Most likely, it removes the backlight which leads to less power consumption. Its a modified version of the IPS display. There are many improvements. However, it still lags behind in some areas. The colors are vibrant and more glowing in AMOLED display. The blacks in the screen are darker because portions of the screen can be effectively turned off. Theoretically, it also means a much more improved battery life.

S-AMOLED is a short name given to Super AMOLED. It stands for super active-matrix organic light-emitting diode. One attribute of Super AMOLED display that distinguishes it from the AMOLED is that the layer which is responsible for touch is implanted directly into the screen rather than existing as an entirely separate layer. This particular aspect distinguishes Super AMOLED from AMOLED.

IPS LCD is synonymous with Super LCD. It stands for in-plane switching liquid crystal display. It’s a title given to an LCD screen that uses in-plane switching (IPS) panels. LCD screens utilize a backlight to produce light for all the pixels, and each pixel shutter can be turned off to alter the brightness. Super LCD was invented to solve issues that come with TFT LCD (thin-film transistor) displays to support a wider viewing angle and much better color and contrast.

Check out? 13 Best Apps to Hide Photos/Videos on Android in 2020

The LCD utilizes a polarized light which then flows through a color filter. Horizontal and vertical filters are present on each side of the liquid crystals which control the brightness and whether or not each pixel is on or off.

Q. Which one is Better and Why? (Super-AMOLED vs IPS LCD)

While comparing the two types of display, I have come to a point that preferring one over the another without a detailed study will be unjust. Both displays have differences as well as some similarities. And in the end any preference can be regarded as an opinion. But there are some visible differences among them which can be helpful in comparing S-AMOLED vs IPS. Like, in my opinion, if you consider deeper blacks and brighter colors then your choice would be the S-AMOLED. As the former is famous for vibrant colors. However, if you prefer sharper images over bright, then IPS LCD would be a better option. Therefore, the opinion can vary while preferring one among the two displays.

Now, I will compare the two from different aspects. And this comparison is based on recent tech updates of 2020.

Image and Color Comparison: (Which one is better?)

S-AMOLED displays are way better at displaying dark black because every pixel will be true black as the light can be turned off for each pixel. The Super LCD doesn’t contain this feature. Because the backlight remains on even if some of the pixels need to be black. Therefore, it could affect the darkness of those areas of the LCD.

As the LCD screens have backlights, which appears as though the pixels are closer together, making an overall sharper picture with more natural effect. While on the other hand AMOLED screens may seem to be over-saturated or unrealistic. After using the AMOLED for a period of time, the whites may appear slightly yellow.

AMOLED screens faced a problem of ‘Burn-In’. Due to which pixel quality deteriorates over time. Though, this problem can be minimized as the technology will improve.

When we use the mobile phones outdoors in bright light, IPS LCD is often said to be easier to use. On the other hand, S-AMOLED screens have few layers of glass and therefore reflect less light.

Another important consideration while comparing the color quality of a IPS LCD screen with a Super AMOLED screen is that the AMOLED display gradually loses its vibrant color and saturation as the organic compounds might break down in cheap smartphones with AMOLED display.

The overall size of the S-AMOLED is smaller than an IPS LCD. As there is no backlight hardware component in S-AMOLED, along with an only one screen having the touch and display which makes S-AMOLED much smarter.

However, the above-mentioned stance can sometimes be regarded as paradoxical. Because it also depends upon the usage of the screen. If all the pixels are lightened at every time then there is a possibility that AMOLED will use more power than an IPS LCD. In addition to that, each pixel of a Super AMOLED display can be fine-tuned for each color requirement. Therefore, power consumption in some situations might be higher than the IPS  LCD.

An IPS LCD screen contains a backlight while S-AMOLED screen doesn’t. Though, the former has an extra layer that supports touch while Super AMOLED display has a built-in touch. As there are enhanced colors and a bit superior quality is used in the manufacturing of S-AMOLED, therefore, its quite clear that Super AMOLED is much more expensive.

The above-mentioned comparison is carried out on a neutral basis along with proper research. There are pros and cons mentioned in both displays. You can read them and choose which according to you is best. My own personal preference would be the S-AMOLED display as I am fond of bright and vibrant colours rather than a sharp picture.