Dear readers, today, March 10, is the Mario’s day. Nintendo has joined hand with Google to bring Mario to Google Maps in order to celebrate Mario’s day and to highlight this unfamiliar day. No doubt it is such a good news for Mario’s lovers including me.

From now onwards, Mario will accompany you in your trips. To enable “Mario Time,”you simply need to update your app from either the App Store or the Google Play Store and then you have to tap the yellow “?” icon which you see in the bottom right of the app. Accept the prompt to enable the feature and your navigation arrow will be replaced with Mario’s kart.

The new Google Maps update with Mario Time is rolling out to iOS and Android users today. Mario will be available for the next seven days, giving you plenty of time to see everyone’s favorite plumber drive around real-world locations. 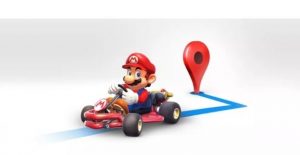 Here’s what Google said in their official press release:

“We know a true Mario fan when we see one. They hum the Super Mario Bros. background music on repeat, daydream about collecting gold coins and 1-UP mushrooms, and want nothing more than to traverse the Mushroom Kingdom with Luigi, Toad, and Yoshi to rescue Princess Peach from Bowser. To celebrate our favorite mustachioed plumber-turned-racer on his special day—MAR10 Day—we’ve collaborated with the team at Nintendo to let Mario accompany you on all of your driving adventures on Google Maps this week.

In addition, Nintendo is also giving a 50 percent discount on Super Mario Run in celebration of Mario’s Day, which means unlocking the game via in-app purchase will cost you $4.99 instead of $9.99 till March 25. For the in-app purchase, the new lower pricing is starting on March 10.