Honor Magic 3 has remained in news during the last few weeks due to its amazing features, Initially, we came to know that the device will be released along with another honor lineup. Later on, we came across another news that was a big one as it came from no one other but Honor’s CEO George Zhao on Honor’s Weibo page. He revealed that Honor Magic 3 will have five cameras at the back including three 64MP cams, a 50MP main shooter alongside a ToF/2MP depth helper.

He also told that the device will arrive on August 12. Now we have come across the official teaser that shows the display of the device and most importantly, its cooling solution. The short clip shows a waterfall screen that includes a pill-shaped cutout for dual selfie cameras. In the teaser, we are shown the animation of the cooling system that is working with snapdragon 888 Plus. The video also shows that the device offers a great gaming experience. The overall music behind the teaser feels like the company is trying to build our excitement level.

Below is the teaser video of Honor Magic 3:

Other than this, Magic 3 was spotted in a Geekbench 4 listing carrying the ELZ-AN10 model number. The device has a 3,556-point single-core score and 10,257-points in the multi-core department. We can also see 8GB RAM while the software side is covered by Android 11. 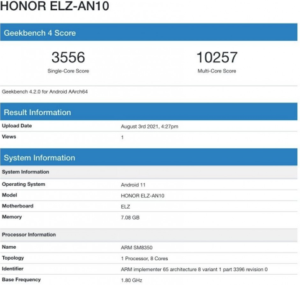 The above mentioned were the confirmed specifications and features since the CEO of the company announced them and some of them were highlighted in the official teaser. We also have some rumors and leaks which might be true.