Myanmar’s military has ordered all the telecom operators to shut their networks due to the ongoing protest against the coup. While other telecom operators are surviving, Telenor’s business in the country has been in limbo. Its investment at the cost of other assets in South Asia especially its Pakistan Subsidiary has been hit hard as its rivals have done extremely well in a growing market.

Telenor was one of the few western companies to play on its fate by investing in Myanmar when it emerged from military dictatorship around ten years back. Since the military rule resumed in the country in 2021, it led to a $783 million write-off this week for Norway’s Telenor.

Telenor is one of the biggest foreign investors in Myanmar and now the operator has to decide whether it should ride out the turmoil and may have to withdraw from the market which contributed to 7% of its earnings in 2020.

“We are facing many dilemmas, highlighting the stark problems facing international firms under increased scrutiny over their exposure in Myanmar, where hundreds have been killed in protests against the February 1 coup. While Telenor plans to stay, for now, the future is uncertain”, said Telenor Chief Executive, Sigve Brekke.

While the new regime imposed to cut the Telenor’s subscription and traffic revenues in the country to half, the operator has got 2 million users during the same quarter with the increase in call volumes, leading to an 18.2 million local customer base.

The blackouts are a major risk, especially for telecoms, which can be considered complicit. And that could cost them. UN’s 2030 Agenda for Sustainable Development highlights the importance of internet access for the eradication of poverty, stating that “the spread of information and communications technology and global interconnectedness has great potential to accelerate human progress, to bridge the digital divide and to develop knowledge societies.”

No doubt, the internet is a prominent contributor to economic growth, especially in emerging economies where the digital economy is rising fast. So, in addition to harming human rights, internet blackouts have demoralizing effects on both the national and the global economy. According to Top10VPN, the global cost of internet shutdowns was more than $4 billion in the year 2020. A study from the GNI addressed this issue by highlighting that low-connectivity countries can lose an average of $3 million per day as a result of internet disruptions.

Telenor shares were down 2.0% lagging a flat Oslo benchmark index. Adjusted earnings before interest, tax, depreciation and amortization (EBITDA) dropped 8% year-on-year to 13 billion crowns, in line with an analyst forecast of 13.1 billion crowns. 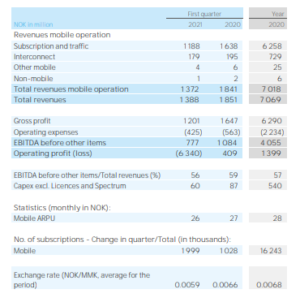 The overall organic revenue and earnings remained the same YOY from 2020, excluding Myanmar’s impact. Credit Suisse, which holds a neutral rating on the stock, said the guidance technically amounted to a downgrade due to the exclusion of Myanmar, which represented 6% of group revenue and 7% of EBITDA last year.

Is Pakistan Market Ripe for Telenor to refocus?

While the telecom operator couldn’t perform well in Myanmar due to Military restrictions (which is understood), its situation in Pakistan is not very good as far as the Q12021 results are concerned as the company focused more on Myanmar. The telecom operator registered revenue of only Rs. 26.1 billion in Q121 which is negligibly up by approximately 2.3% from Rs. 25.5 billion it reported during the same period last year.

While the company has held Covid responsible for this deteriorating situation in Pakistan, the same Covid went very well for its competitor Jazz 4G which registered the highest-ever Revenues of Rs. 55.05 bn during 1Q21, 11.7% higher than the Rs. 49.282 billion, the revenue it had reported during the same quarter last year. 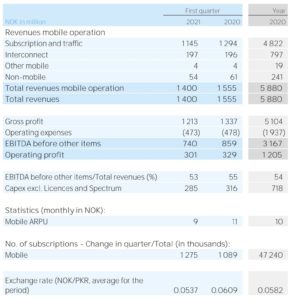 While the no of subscriptions increased with a slight increase in data usage for Telenor Pakistan, the average revenue per user (ARPU) dropped by 2 percent to Rs. 174 per user per month, down from Rs. 177 during the same period in 2020.

Keeping in view this, the operators should work on the improvement of its services in the country as the Q1 2021 result is quite alarming, and maybe in the upcoming years, it will have the same fate and uncertain future as Myanmar but for a different reason.