Last month, Qualcomm announced to unveil another mid-range SoC- the Snapdragon 675. It is said to be a close sibling to the Snapdragon 670 and 710, however, it is built on the 11nm node. It features Qualcomm’s 4th generation Kryo core design. Now First Snapdragon 675-Powered Smartphone surfaces on Geekbench but we do not know which phone is this.
The details on Geekbench revealed what chipset CPU should be capable of. The score sheet revealed that new generation CPU cores from Qualcomm make all the difference and the Snapdragon 710 falls short in both tests. 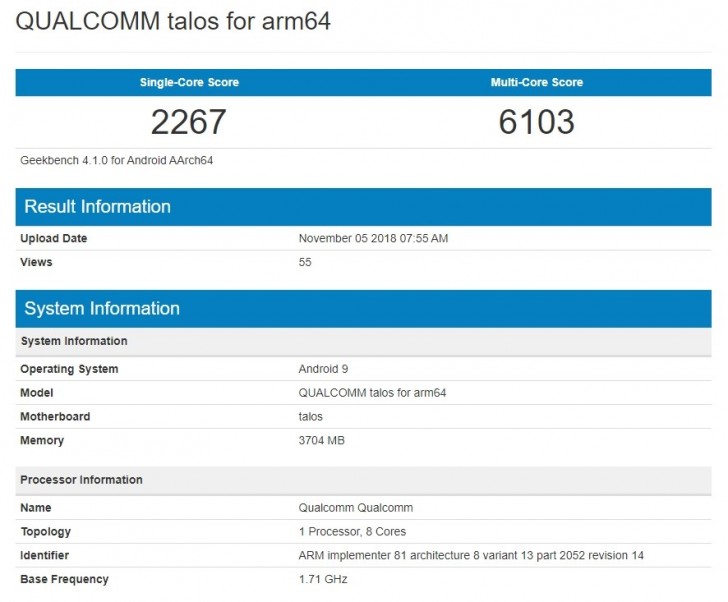 It should be mentioned here that the Snapdragon 675 uses the same 2+6 core design, but 2x Cortex-A75 just like in the Snapdragon 710 and 670. The 675 adopts ARM’s new Cortex-A76 cores.
Snapdragon uses less powerful  Adreno 612 GPU than its seniors. However, Qualcomm said that they have optimized it for better gaming performance.
Fro score sheet we can also analyze that the device will run on Android 9.0 Pie and has 4GB of RAM.
Meanwhile, there are rumours that HTC Upcoming Smartphone will be Powered by Snapdragon 435.
Although HTC is facing a continuous fall in its financial results, still some reports claim that the company is working on a new smartphone. According to the latest reports, HTCUpcoming Smartphone will be Powered by Snapdragon 435.