Smartphones powered by Android Go are coming to market globally as they have better performance when compared to old entry-level smartphones. It seems Samsung is also about to accompany other smartphones brand in this category as Galaxy J2 Core is expected to be the first Samsung’s Android Go Smartphone.

Galaxy J2 Core having a model number SM-J260G has hit the GeekBench benchmarking database. SamMobile reported that the phone will be launched as Galaxy j2 Core. “7570” refers to the Exynos 7570 processor. It is a quad-core A53 chipset. However, the other Samsung Phones: Galaxy Xcover 4 and Galaxy J5 Prime, do not have “GO” mentioned.

Here is the Geekbench-benchmark report of Samsung J2 Core: 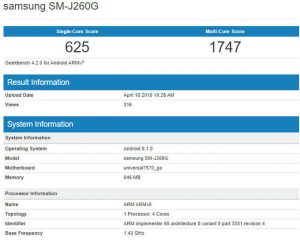 There are rumors that Galaxy J2 Core will be launched soon, however, Samsung has not given any confirmation about it. If this is indeed an Android Go handset, it should be initially launched in emerging markets, but a global rollout isn’t out of the question.

Samsung Galaxy series keep on surprising us with new features but this leak is out of a world. Yes, there were many leaks regarding Foldable Samsung Galaxy X, all were good and we were super excited to see it being the first foldable phone ever.