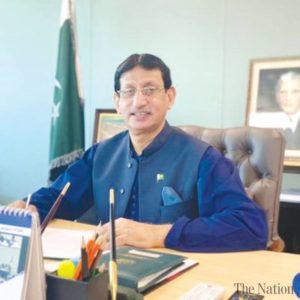 Amin Ul Haque give a speech at the event. He said that the Ministry of IT, through its entity Ignite-National, has so far established five NICs. Including, Islamabad, Karachi, Quetta, Lahore, and Peshawar, with a sixth NIC under process in Faisalabad to focus on agri-tech. Several NICs and incubators in Healthcare Technology, Gaming & Animation, and Technology of Electronics are being developed in 2nd tier areas. These are in compliance with the government’s plan for digital Pakistan and the development of an appropriate environment for entrepreneurial intention.

As a result, the National Incubation Center (NIC) in Hyderabad will now increase the efficiency of several businesses in Hyderabad. Including, agricultural, livestock, decorative industrial goods, textile, sugar, cement, and others.

Earlier in his opening remarks, the CEO of Ignite pointed out that despite becoming the nearest district to Karachi and the agricultural center of Sindh. Hyderabad has always retained its identity in all aspects of life. As a result, while establishing its very own National Incubation Center (NIC), the city will retain its identity.

Also read: Samsung’s Exynos 2200: A Better AMD GPU Than A15 Bionic by Apple