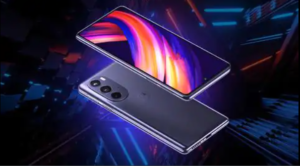 The Motorola Edge 30 Ultra, also known as the Moto Edge X, was identified in graphics revealed by well-known leaker Steve Hemmerstoffer. As previously stated, the leaked renderings show the smartphone in Blue and Grey. Motorola is expected to release the Edge 30 Ultra in a variety of color variants. The forthcoming Motorola phone is pictured as having a hole-punch display, low bezels, and flat sides. The power button is located on the phone’s left spine, while the volume rocker is located on the right side. The handset is believed to include a Google Assistant button as well as a fingerprint scanner. A microphone, a speaker grille, and a USB Type-C connector are also visible at the bottom. 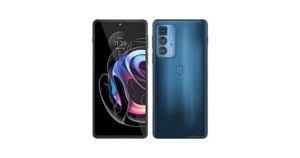 In terms of optics, the revealed renderings indicate that the phone would have a triple back camera configuration, which confirms previous rumors. The back cameras, as well as an LED flash and a noise-canceling microphone, are housed in a rectangular module. The Edge 30 Ultra is estimated to be 163.1×76.5×8.8mm in size.

Earlier rumors stated that the Motorola Edge X will include a 6.67-inch full HD+ AMOLED screen with a refresh rate of 144Hz and compatibility for HDR10+. It is expected to include a Qualcomm Snapdragon 898 CPU and two RAM and memory configurations: 8GB + 128GB and 12GB + 256GB. It may be compatible with Android 12. Two 50-megapixel lenses and a 2 MP sensor are expected to be included in the device’s triple camera setup. The handset is anticipated to include a 60 MP selfie camera. The new Motorola device is reported to include a 5,000mAh battery with 68W fast charging capabilities.

You may be also interested in: Ericsson Consumer Lab Has Stated That Pace Setting 5G CSPs Twice As Likely To Grow Revenue