This time the phone appeared right next to the Pixel 3 Phone. So, we can see the main design differences between the two. Let’s have a look at the leak first. 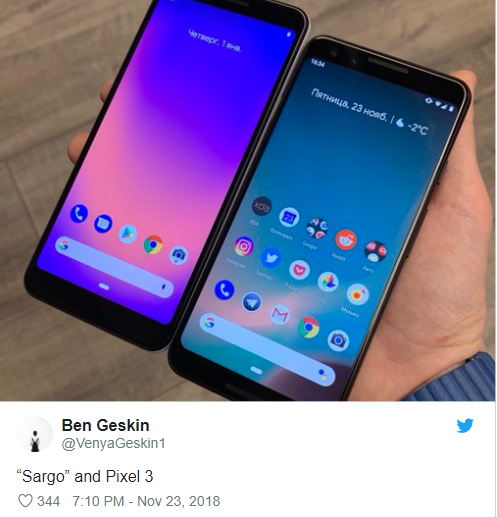 In the above image, the Lite model is on the left while the Pixel 3 is on the right. It is quite obvious that the Lite’s screen is taller than the Pixel 3’s. The Pixel 3 Lite has a 5.56″ diagonal screen as compared to 5.5″ screen of its predecessor. Moreover, it has an aspect ratio of 18.5:9. Although the design of the phones looks quite similar. The Pixel 3 Lite is powered by Qualcomm’s Snapdragon 670 SoC. Furthermore, it has 4GB of RAM, 32GB of storage. The phone will feature a 2,915 mAh battery. The battery capacity is exactly the same as the Pixel 3.

The Lite is also expected to feature the same 12 MP rear camera as that of its predecessor. So, it means that it would instantly become the mid-range with the best rear camera. In addition to that, there will be a single 8 MP camera for selfies. It will also be the same as the ‘normal’ camera seen in the Pixel 3 and 3 XL. Google’s new midrange smartphone will have a 3.5 mm headphone jack. The phone will have a glossy frame, which means it might be made of plastic. The white model that was leaked before will have a neon green power key as well. The Pixel 3 Lite will run Android 9 Pie. However, it may only be offered in specific developing markets. There are still no words about its pricing yet.