We all know that HMD Global is one of the most efficient companies when it comes to pushing out Android updates. It always provides authentic information. Recently, HMD global has confirmed that four Nokia Phones will soon receive Android 9 pie. We know that the Nokia 7 Plus received Android 9 Pie just one month and a half after its release. At the Nokia 7.1 launch event, the company provided an updated timeline for some of its other smartphones.

HMD Global has confirmed that both the regular Nokia 6.1 and the Nokia 6.1 Plus will be updated with the newest version of Android. In addition to that, there is a good news for the owners of the Nokia 8 and Nokia 8 Sirocco. They will be pleased to hear that their update is scheduled for November. 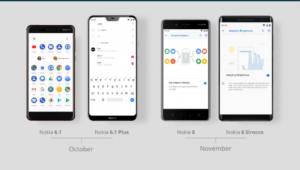 No official changelog has been provided yet. However, the features such as Adaptive Battery, Adaptive Brightness, and Do Not Disturb mode will make an appearance. Similarly, the Digital Wellbeing implementations that were announced with Android 9 Pie will also be included. Furthermore, the smartphones will soon support the new gesture-based interface.
Also Read: Nokia 7.1 Price Leaks Ahead of Launch
Laiba MohsinLast Updated: Oct 4, 2018
Share
Facebook Twitter Pinterest