Samsung keeps on launching some great devices and this time it has come up with Galaxy A03s. While the company tries to keep all the features hidden, we always come across many leaks, thanks to the leakers. The leaked specifications of Samsung Galaxy A03s reveals that almost the overall design is similar to Galaxy A02s that was launched in November last year. It was expected as this device is a successor of A02s.

The difference between the two devices is that A03s will come with a side-mounted fingerprint scanner and USB Type-C port which was not present in its predecessor. 91 mobiles has shared some renders of this upcoming Samsung device. As shown in the render both the devices are too much alike however there are two major differences in A30s. The first one is the inclusion of a side-mounted fingerprint scanner and another one is a USB Type-C port instead of a Micro-USB port that was present previously. 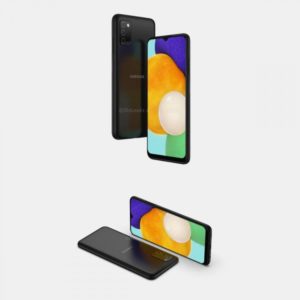 The upcoming device will have a triple rear camera setup. It means the cameras are vertically aligned in a rectangular module having round edges. A waterdrop-style notch display complements the device along with the large chin. The overall measurements of smartphones are rumored to be 66.6×75.9×9.1mm, along with 3.5 mm audio port.

These are the leaked specifications of Samsung Galaxy A03s

The leaks also confirm the 6.5-inch Infinity-V Display housing a 5-megapixel selfie camera in the notch. The triple rear camera setup will have a 13-megapixel primary sensor along with two 2-megapixel cameras. Right now we have no received any information regarding the processor and the battery capacity of the smartphone. Since A02s launched last year had a 5,000mAh battery and supported 15W fast charging, we can expect that battery and processor specification would be better than this 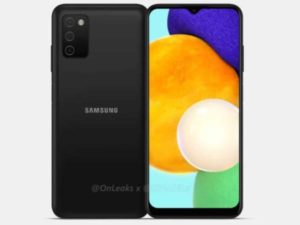 While these are just leaks, we need to wait for official confirmation from the company regarding the features of the device.