We all know that Samsung is all set to hold a Galaxy event on October 11. Reportedly, a new Galaxy smartphone is largely expected to launch with as many as four cameras. The recent leaks suggest that the two Samsung Galaxy Phones that are expected to launch at the event are Galaxy A9 Star Pro and Galaxy A7 (2018). The most notable information coming out of these leaks is that the Galaxy A7 (2018) will sport a triple camera set up at the back. On the other hand, Galaxy A9 Star Pro will have four cameras at the back. If this is true, the Galaxy A9 Star Pro (2018) will be the first device to sport a quad-camera setup at the rear.

According to the leaked info, Galaxy A9 Star Pro (2018) will come with the SM-A920 model number. It will sport four cameras at the back placed vertically with a flash below the camera setup. Moreover, the smartphone will be available in Black, Blue Gradient and Pink Gradient color options. There will be a fingerprint sensor at the back as well. Furthermore, the smartphone will come with 3.5mm audio jack support. It may have a Bixby button like the other Samsung flagships. Furthermore, Samsung Galaxy A9 Star Pro price will be around EUR 500 (about Rs. 42,600). 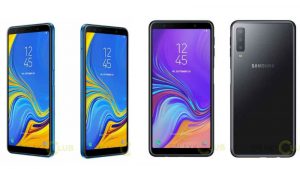 On the other hand, Samsung Galaxy A7 (2018) is seen sporting a triple camera setup aligned vertically with the flash sitting beneath it. Moreover, it will likely be powered by a Snapdragon 710 or Snapdragon 660 SoC.  The fingerprint sensor is expected to be mounted on the side. However, Galaxy A7 (2018) is reported to be powered by the Exynos 7885 SoC in certain markets, paired with 4GB RAM. These phones may launch at the upcoming Galaxy Event. However, we are not sure about it. Let’s just wait and watch. 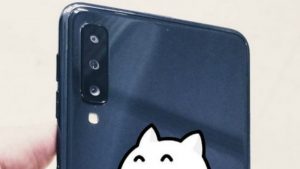