Some weeks back, World Intellectual Property Organisation published a patent of Samsung Foldable and Flipping phone on its website. The initial drawings of the device showed a great trifold design which looked quite interesting. That patent is now approved and the whole concept is about to get its shape. Now Samsung has given us some visual concepts which further confirm the design of the Samsung Trifold Smartphone.

Everything you need to Know about Samsung Trifold Smartphone

Let’s go Digital has found a more detailed and fascinating, eyecatching design used to create the first 3D renders of the upcoming foldable device from Samsung giving us an idea of how the device will probably look.

These are the renders received by Lets Go Digital: 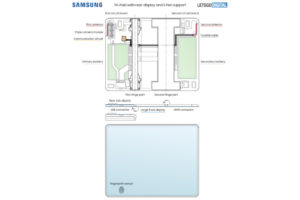 The below sketch is based on the renders received by LetsGoDigital. It is provided by Samsung Electronics giving us a better idea of how the device will look like. 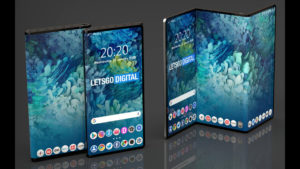 The design shows that the foldable device will have three screens. These screens can fold out to become one giant flat display. This display can be vent into a variety of positions. These screens are connected through two hinges. One hinge folds inwards and the other folds out creating a Z shape.

The renders show that when the phone will be in a fully folded position it will look like regular phones but a little bit thicker than them. However, when the device will be unfolded, it will give a tablet-like look with an HDMI connector and working display at the back.

Samsung has revealed that a 4MP selfie camera will be hidden secretly under the front display. Other than this, the company has not given us any information about the device.