It seems like Samsung is all set to launch its Galaxy S22 Lineup which is announced to be launched by the start of February next year. Every now and then we keep on getting information regarding the devices, be it S22 or S22 Ultra. A few days back there was a debate on the internet that the company is going to change the name of the Galaxy S22 Note. Moreover, it was also rumored that the design of Vanilla and S22 ultra is going to be the same as their successors, the S21 family. While this all is the talk of the town, we have come across another big news: The live image of Galaxy S22.

The real-life image of Galaxy S22 appeared on Weibo. The design proves the leak totally right and the design is totally similar to S21. The only difference is the glossy back panel and matte finish.

Below is the first live image of Galaxy S22: 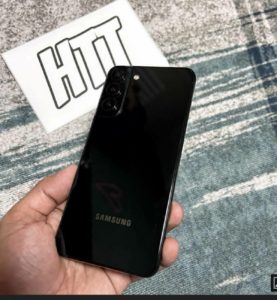 As the above image shows, Galaxy S22 Ultra will follow the same verticle triple camera design in the upper left corner. This module is connected to the frame along with an LED flash right placed at the right. While this is the first image of the device, it might be a dummy as well but I think all the rumors and leaks were totally true.

Furthermore, FCC has certified the SM-S908U smartphone, which is said to be a Galaxy S22 Ultra rumored to be renamed as NOTE. The device is said to come with a “Stylus Pen” and its a new pen since its model number does not match with the previous products of the company.

While Samsung is searching for the culprit who leaks the details of the upcoming devices, we keep on getting more details and live images, which is quite funny.