Samsung is ready to launch Galaxy Note 9 on August 9. Everyone is anxiously waiting for the device as we have got to know about some of its amazing features from the leaks. Just recently, we have got leaked Image of Samsung Galaxy Note 9 case, which shows Headphone Jack and Bixby Button.

Here is the Leaked Image of Samsung Galaxy Note 9 Case

The Picture of Samsung Galaxy Note 9 case here outlines all the ports that the device has. The phone has a USB charging port along with a microphone and a 3.5mm audio jack. The presence of a headphone jack negates all the previous leaks. Note 9 also features a USB Type-C connector. There are two volume keys below the Bixby button, but the right side doesn’t seem to house any other keys or ports. 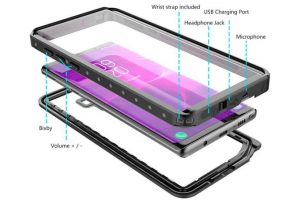 Sadly, Note 9 will have a dedicated Bixby button too. Maybe some people will like it but people like me will hate it for sure. Shockingly the most important port is not highlighted in the picture which is the S-Pen’s port. Maybe the case manufacturer forgot the most important feature of Note 9.

If you’re one of the many fans of the Note series who can’t wait to get his hands on the upcoming flagship, maybe these details will be a blessing for you.

What do you think about the absence of S-Pen’s Port? Don’t you think Samsung is about to Betray its fans once again?