We have heard a lot of rumours about the upcoming iPhone series of this fall. Many of the previous rumours painted a colourful palette of iPhone models slated for release this fall. According to tipsters, Apple was working on a wide range of colours for the iPhone series including White, Black, Grey, Red, Blue, Yellow, Orange and Pink. This is the widest variety range that we’d ever seen from the company. We still don’t know that which of the iPhone models would be getting which colours. Recently, a leaked image showed up. The 6.1 Inch iPhone 9 Leaked Image revealed three dazzling Colours.

A newly leaked live image, supposedly depicting three iPhone 9  prototypes show off high-gloss backs and saturated colours. The leaked image shows three amazing colours of 6.1 Inch iPhone 9. The iPhone 9 will come in Red, Blue and White Colour. If we look closely we can see that the metal frame of the smartphones will also carry the same colour as the glass back this time. Let’s have a look at the leaked image. 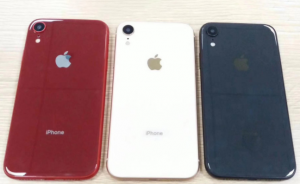 Reportedly, the iPhone 9 will be the cheapest iPhone model among the iPhone lineup that Apple will launch this year. It will have the LCD screen instead of an OLED panel. The phone will have only one camera on the back. In addition to that, Apple will also bring the much-anticipated premium iPhone Plus model with a 6.5-inch OLED display and all-out specs.
The three upcoming iPhone models will carry the following codenames within Apple:

The new 2018 iPhones will be unveiled on September 12, 2018. Let’s see will new iPhone models come only these three colours or will we be able to see new amazing colours.