Apple CEO Tim Cook delivered the keynote talk to the International Association of Privacy Professionals. He was calling the struggle for privacy “one of the most important battles of our time,” as predicted. His remarks followed FTC Chair Lina Kahn’s recent proposal for a federal privacy law. Also, antitrust measures to weaken the influence of internet behemoths.

Cook’s remarks were brief, focusing solely on the significance of privacy and Apple’s dedication to it. His words have plenty of plugs for the firm’s privacy features thrown in for good measure. The company’s CSAM scanning ambitions, which were placed on hold because of privacy concerns, received no update.

Cook stated that technology can do both good and evil and that it was up to us to choose the proper path between the two realities before us.

“One in which technological advancements unleash humanity’s full creative potential, ushering in a new era of possibilities.” The other is when technology is used to deprive humans of something fundamental: our privacy. And that’s a setback we can’t tolerate.”

Cook stated that privacy is important not only for safety and respect but also for allowing people to be themselves and take risks.

“A world lacking privacy is a world that is less imaginative, sympathetic, innovative, and human.”

Apple, according to Cook, is battling for privacy on numerous fronts. The CEO identified the danger from the ‘data-industrial system,’ a twist on the military-industrial complex term that describes how governments and arms providers have a symbiotic association at the cost of humanity.

“It’s a dedication to safeguarding individuals against a data-industrial complex built on a monitoring foundation.”

He claimed that if such surveillance were apparent – anyone physically following us, observing us, documenting us – we would never tolerate it, and he called for nationwide privacy law. 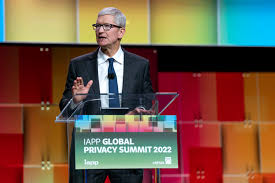 This was the only time he was paused by applause during his address. The impact was slightly diminished when he followed up by reaffirming Apple’s opposition to sideloading programs or allowing competitor apps.