The new feature will now make high quality video calling available to its 250 million plus users globally. This update enables users to launch a Duo video call with a single tap within the Truecaller app, and switches between WiFi and cellular data for uninterrupted conversation on-the-go.

Truecaller integration with Google Duo is available for Android and iOS users as a permission-based service, by which users will be able to opt in and out at any time. Google Duo has also been rated as the highest quality video calling app recently by an NDTV Gadgets 360 study. 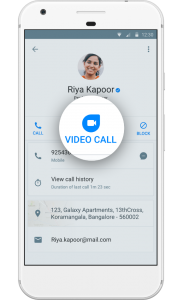 Elaborating upon Truecaller’s end-to-end communication platform, the integration of Google Duo offers yet another way for users to connect. Following the launch of Flash Messaging in April, the Google Duo-Truecaller integration will now enable video-first users with the communication mode of their choice.

“Sometimes voice and text just aren’t enough and nothing beats the experience of communicating face to face. We’re very excited to announce the next step in delivering a one-stop communication platform for Truecaller users globally. By having a fantastic partner like Google, we can provide a high-quality video experience to millions of users using Google Duo”

“Video calling should work for everybody, regardless of what platform they are on. Our aim is to make video calling simple, fast, and available to everyone. “With this Truecaller integration, we’re able to bring a better video calling experience to millions of new users.”

People use Truecaller to stay ahead. It helps them know who’s getting in touch, filter out unwanted and focus on what really matters. The company provides a suite of unique services such as a dialler that offers caller ID, spam detection, messaging and more.

Truecaller’s mission is to build trust everywhere by making communication safe and efficient. Headquartered in Stockholm, Sweden, the company was founded in 2009 by Alan Mamedi and Nami Zarringhalam. Investors include Sequoia Capital, Atomico and Kleiner Perkins Caufield Byers.