Twitter, the social networking site facilitates 320 million users is celebrating its 10th anniversary today. Its 10 years to the day since the Twitter co-founder Jack Dorsey sent the first tweet into the Twitter sphere. Twitter was founded on March 21, 2006, when Dorsey sent his first tweet “just setting up my twttr.” Currently it shares almost 500 million tweets a day while making its place among the other most famous social networking sites.

Twitter has transformed people to express their views in just 140 characters which gives the unique distinction to the Twitter. This social networking site is now the trendsetter breaking all the news events in real time. It works for everyone including common people, celebrities, sports stars, and even the heads of states.

Twitter has also been closely associated with key political, social, and cultural events such as ICC Cricket World Cup 2016, the London riots in 2015, Ukraine Crisis and much more. According to a recent survey all the meteorological events news like storms and earthquakes comes faster on Twitter than any other traditional tools.

The blog titled “Thank you! Love Twitter” has also invited all users to celebrate its 10th birthday by tweeting using the hash tag #LoveTwitter. Users are overwhelmingly responding to this blog by promoting the given hash tag. 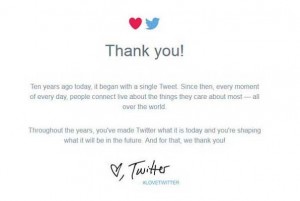