Twitter recently made a few small adjustments to its platform. This includes options like changing the color of a “like” from red to pink, as well as altering the appearance of tweets and responses on a user’s profile page. Now, a new adjustment has shifted the order of the “Copy Link” and “Bookmark” buttons for a select group of its app users. It also appears to be very pointless.

The sequence of these two options in the Twitter mobile app has been modified, according to a source. A customized share sheet appears when a user touches the share button in the bottom right corner of a tweet, with the top-most option being to share the tweet through direct message. “Copy Link,” “Bookmark,” and “Share via” were the three options in the next row, in that sequence.

However, in an act of infinite brilliance, the business recently rearranged the “Copy Link” and “Bookmark” operations, causing long-time Twitter users to bookmark tweets rather than copy tweet URLs.

Furthermore, deleting undesirable bookmarks is a difficult task. When the bookmark confirmation banner displays, there is no undo button, and tapping the bookmark option on the same tweet merely tells the user that the activity has already been completed. To manage their bookmarks, users must first go to their profile settings and then to the “Bookmarks” section. 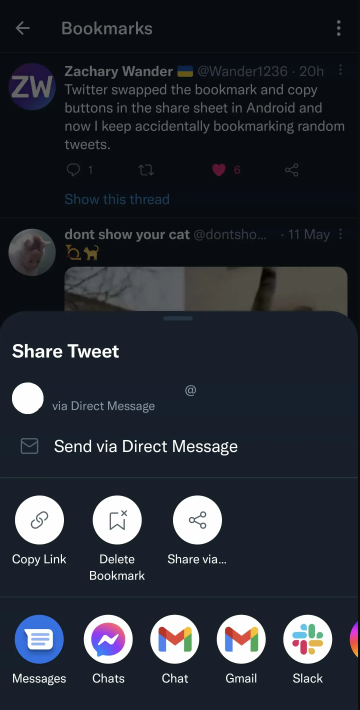 The behavior of the share sheet on three devices in three separate places has been investigated by a source. “Copy Link,” “Share via,” and “Bookmark,” in that sequence, are the options in India. In the meantime, our colleague in the United Kingdom had “Copy Link,” “Bookmark,” and “Share via.” We also spotted “Share through,” “Copy Link,” and “Bookmark” in Germany. Surprisingly, we all have the same version of the program – 9.45.0.

The firm has already experimented with the app’s colors and typeface, but this is one A/B/C/x test that is more likely to irritate than to benefit. We don’t know what data Twitter will be able to collect as a result of this trial, but it appears that the company is winging it.

Many users are dissatisfied with the sudden changes, and reports of inadvertent bookmarking continue to rise. While Twitter has great intentions for major changes like adding an edit option and combining movies and photographs in a single tweet, it would be better to focus on the minor stuff first… and stick to it.