For the first time Twitter is expanding beyond its 140-character limit, the company announced today. The social network claimed, that it has doubled the character limit to 280 on tweets to allow its users to convey more meaning or emotion.Twitter Expands its Character Limit on Tweets to 280.

The decision was motivated by research carried out by the social network that portrays you can convey double the amount of information per character in languages like Japanese, Korean and Chinese than you can in languages like English, Spanish, Portuguese or French.

Our research shows us that the character limit is a major cause of frustration for people Tweeting in English, but it is not for those Tweeting in Japanese.

The feature will initially be made available to a small group of users for the time being, as the expansion is considered more of a test than a large, public rollout for now.

Twitter users feedback regarding this change can be seen by the tweets below: 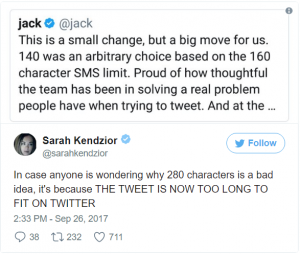 Twitter said the change could mean people tweet more frequently. It all depends on what the users demand from the social media platform. There have always been critics when there is a new change introduced to a well known platform. One should always look at the positive side!