It seems that Twitter is very preoccupied now a days to increase the Limits of tweets and Display names. It is evident from the tweets of Twitter support center who revealed that Twitter Increases Display Name Limit up to 50 Characters.

Two days prior the company also announced that Twitter is extending the 140 characters limit to 280 characters in all languages. This will give people freedom of speech to express themselves in a better way.

Here’s How Twitter Disclosed the good news about characters limit: 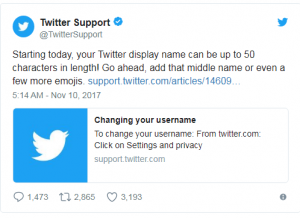 Previously people were limited to 20 characters but now they have 50 to work with. With this increased limit one can also add emojis with their names to justify their names. People will longer names would be more happy and can easily write MuhammadMalikAddelAwanKhadimHussain.

How to Change Twitter Display Name with long character Limit

To change your display name, head on over to your profile, tap on ‘Edit Profile’ on the right side of your page, and then click on your current name.

I am very happy with this feature to write long name with emojis that show my feelings. It should be mentioned here that this feature is only valid for your display name not your user name.

The feature appears to be live now, so go ahead and go wild.