Twitter has been testing a new audio-only broadcast feature through its Periscope platform for a few weeks. Recently, the company announced that the feature is now publicly available for all iOS users of the Twitter app and its live-streaming app Periscope. The good part is that Twitter and Periscope will now allow users to go live without being on camera. Twitter & Periscope Audio-Only Live Broadcasts will allow you to go live without filming yourselves.

The main reason behind it is to reorient the purpose of the live-streaming platform towards live podcasting and other audio-first content. Twitter’s Periscope and live video platform has waned in recent years. This is because the popularity of public live-streaming has shifted away from breaking news towards the professional media and gaming-centric content on Facebook, Twitch, and YouTube.

In order to go live follow the steps written below: 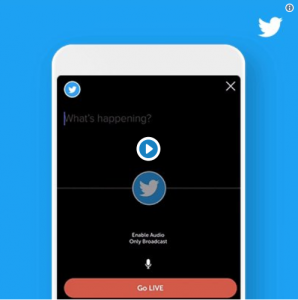 In addition to audio-only live broadcasts, the Twitter app for iOS also gained a couple of other improvements and bug fixes that are written as follows:

The audio-only broadcasts are now rolling out for iOS devices. The company made a lot of improvements for their Twitter and Periscope users. If you are an iOS user, make sure to download the latest versions of the apps. After doing so, you will be able to go live without being seen by your followers. Android users will get it soon as well. However, Twitter has no words on the rollout of this feature for their Android users yet.