We all know that Twitter is making a lot of changes to its platform nowadays. Two days back we came to know that Twitter is testing Unfollow Suggestion List that will allow the users to unfollow less interactive people. The company wants to provide ammunition to its critics. Recently, Sara Haider, Twitter’s director of product management, tweeted a couple screenshots today. Those screenshots showed off changes the platform is considering. In order to make things more conversational, Twitter Threaded Replies & Status Indicators are Under Testing.

The Twitter threading seems really fine. Furthermore, it will make it very easy to follow a conversation. It will be the same as the feature of threading within a user’s own tweet which was launched back in December of last year. The status updates, however, don’t seem great. It can create certain sort of problems as Twitter is already facing harassment issues. Just Imagine knowing anyone is online which you don’t like will certainly tempt you to write something bad about him. These are the cases which usually happen so, Twitter Status Updates don’t seem a fine option considering Harassment issues.

It is a fact that a status update might not be a smart idea because of Twitter’s harassment issues when you consider how trolls could use it to ensure their replies are being seen. 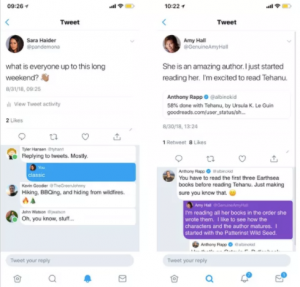 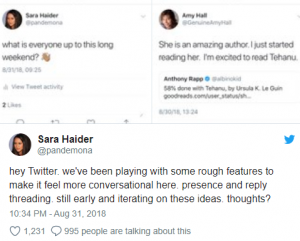 Twitter’s director of product, Sara Haider doesn’t mention a timeline for these updates. So, it may be possible that Threaded Replies and Status indicator options never roll out. The company has no words about anything else that whether they will make the feature available or not. All we have to do is just wait and watch.