We all know that Twitter did a crackdown on the bot accounts a few weeks back. People around the world, including many from Pakistan, lost a huge chunk of their followers base. Recently, Twitter came up with another feature that was under testing for the last few days. Twitter tested a feature that will suggest the users to unfollow the accounts. Twitter Unfollow Suggestion list will help them to unfollow the people who don’t engage regularly.

The test lasted for only a few days. After doing so, Twitter stated that:

“We know that people want a relevant Twitter timeline. One way to do this is by unfollowing people they don’t engage with regularly. We ran an incredibly limited test to surface accounts that people were not engaging with to check if they’d like to unfollow them.”

So, Twitter is testing an unfollow suggestion list that could give more ammunition to its critics. The company’s aim will be letting people follow fewer accounts. Twitter will see your patterns of activity. And people you are least interacting with will be suggested as possible candidates for Unfollow. It will be your choice to unfollow them or not. 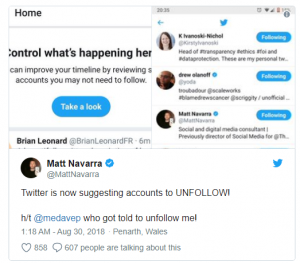 The business side of this new feature is to possibly increase the engagements between existing users. No doubt following more people will expand your area of interest and things you are aware of at any given time but you can’t actually engage with all at the same time. Too much choice is bad. So it is better to have fewer followers so that you can engage with them more.

However, there are still no words from the social media platform about the rollout of this new feature.