As we all know that Twitter has attempted a crackdown on abusive behavior across its network. Recently, a new policy was announced by the company. The policy is related to those who repeatedly harasses, threatens or otherwise make abusive comments during a Periscope broadcaster’s live stream. Twitter will enforce its periscope community guidelines. They will review and suspend the habitual offenders posting abusive comments on periscope live streams. 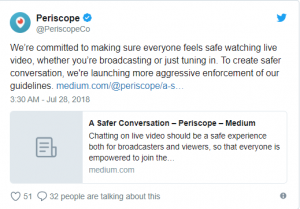 Currently, Periscope’s comment moderation policy involves group moderation. When only one person reports to a comment as  “abuse,” “spam” or “other reason,” the Periscope’s software randomly select it to take a look at the comment and decide whether it is okay or not. The randomness factor here prevents a person from using the reporting feature to shut down conversations. The commenter only gets suspended when a majority of the randomly selected voters agree that the comment is spam or abuse.

However, the suspension is like a temporary ban because it only disables their ability to chat during the broadcast. It doesn’t prevent them from continuing to watch other live broadcasts and make further abusive remarks in the comments. So, this is the main reason behind the new policy of Twitter. The company wants their users to feel safe watching live broadcasts.

The company is attempting to address such problems. Acquiring the anti-abuse technology provider Smyte will offer help to the company to address abuse at a greater scale in the future. The suspension of such unwanted accounts will surely play a good role in the long-term health of the company.