Twitter keeps on testing new features to improve the user experience. Recently, Twitter introduced the Twitter Report Spam Options that will make it easier for Twitter users to report spam. In addition to this, Twitter also introduced a new feature that will let the users quickly switch between the latest and top tweets. Twitter’s New Feature will be a shortcut for the iOS users to toggle between the Tweets.

The new feature is currently under testing. It is available for a small set of iOS users right now. However, the company claims that they have been working on this feature since September. People who are testing the new feature would see a new button on the top right corner. Two options will arise when you will tap on that button. The options would be “Switch to latest Tweets” or “Switch to top Tweets”. 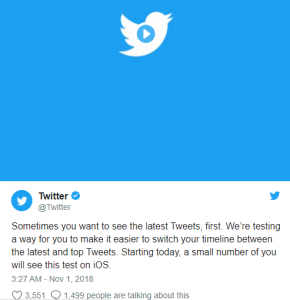 This all-new feature will allow you to organize your timeline in chronological order. It’s a shortcut that will give users fast access to functionality that was buried deep within the app’s settings menu. So, now you don’t have to head to app’s settings as a simple button can perform the same function for you.
There are still no words by Twitter that when will this feature roll out. Furthermore, we also don’t know that whether it will be available for only the iOS users or will it make its way to Android Apps too.