TweetDeck will no longer be offered as only Mac program in the near future. On July 1st, Twitter will deactivate that version of its client for power users.

The TweetDeck team tweeted, “We’re bidding goodbye to TweetDeck for the Mac app to focus on making TweetDeck even nicer and testing our new Preview.” “It will be available till July 1st.”

Because the standalone program is being phased out, Mac users may soon need to open the client in a new browser tab or juggle another tab to continue using TweetDeck. There are, however, alternative options, according to sources. Using services like Unite for macOS or Coherence X, you can convert web programmes to native Mac apps. Alternatively, you can use Tweeten, which is based on TweetDeck. 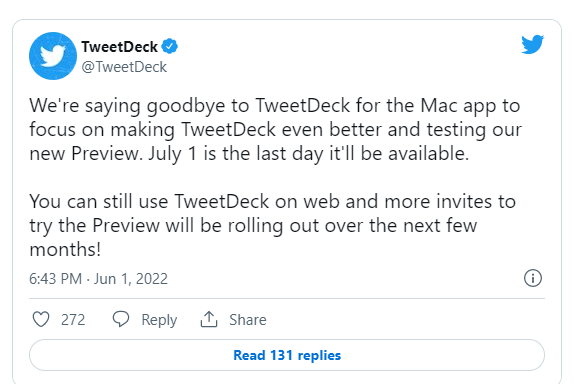 There have been rumours that as part of Twitter Blue, Twitter aims to do TweetDeck, a paid service to encourage more users to sign up. Elon Musk, Twitter’s potential new owner, has big plans for the subscription service, so putting TweetDeck behind a paywall isn’t out of the question.

After years of not updating capabilities to compete with clients like TweetDeck or third-party solutions, Twitter’s native Mac program died in 2018.

Unlike the 2012 fiasco, when it abruptly shut down third-party apps due to tight API restrictions, Twitter has committed to opening and updating its API (and perhaps even decentralizing access entirely, someday) to allow third-party clients that are viable options in 2022. Still, there is only one TweetDeck for many people who need to work with Twitter on their desktop at all times.

Last year, Twitter began testing a new version of TweetDeck. The new TweetDeck is designed in the same style as Twitter’s online app.

Also read: Tekken 7 is the Series’ Best-Selling Game in 26 Years