The UK-funded Karandaaz will triple the impact of a leading health diagnostic service provider and set up a unique warehouse for agricultural produce in Punjab. These two investments are expected to create more than 900 new jobs in Pakistan. This was announced today at the signing of two new equity investment deals in Islamabad.

The first deal was signed with Excel Labs and will help Excel Labs network expand its service by three times and provide easy access to world-class diagnostic services for millions of Pakistanis.

The second deal was signed with an innovative entrant in agriculture sector. Through this investment, Punjab will have its first state-of-the-art controlled atmosphere warehouse, benefitting the farmers through better off-season prices and reducing post-harvest losses in agriculture value chains.

Karandaaz’s latest equity investments will allow both these high-growth businesses to expand their operations and create more jobs, and economic activity in the health and agriculture sectors. These equity investments are collectively expected to result in almost 900 new jobs out of which 200 will be for women and more than half will be for youth. These investments will also catalyze growth in these two high-potential sectors, generating further benefits at the macro level. 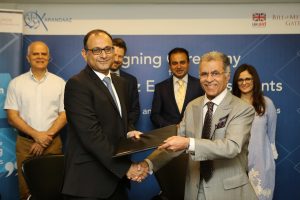 “The investment in Excel Labs network will enable it to increase its capacity and preform several million additional tests across the country. The diagnostic labs will also have three times greater geographic coverage through new lab collection points in Punjab, Khyber Pakhtunkhwa, and AJK. Similarly, our investment in a controlled atmosphere warehouse will strengthen a market leader and an innovator in agriculture. Increase in the capacity of this innovative establishment will lead to farmers’ ability to increase longevity of their produce and reduce wastage.”

Talking about the significance of these investments, CEO Karandaaz Pakistan, Ali Sarfraz said,

“The focus of Karandaaz’s investments is on deploying growth capital in businesses with potential for profitable growth and employment generation, in addition to generating risk-adjusted financial returns for Karandaaz. We are mainly focusing on investments that have a demonstration effect and support the development of a market for SME financing.”

“The census results tell us that Pakistan’s economy needs to grow even faster, and Small and Medium Enterprises should be the engine of that growth.  DFID created Karandaaz to fill a gap in the financing market for SMEs and to demonstrate that while investing in Pakistani companies makes business sense, it can make development sense too.

Today’s deals will create 900 new jobs and support important services – such as a tripling of the coverage of Excel Lab’s medical diagnostic tests. We are proud to help the people of Pakistan to develop their economy. And we hope that Karandaaz’s success will inspire others to invest in the entrepreneurs that are driving Pakistan’s growth.”

Karandaaz Pakistan promotes access to finance for micro, small, and medium -sized businesses through commercially directed investments and financial inclusion for individuals through promotion of digital financial services. It also develops and disseminates evidence based insights, and encourages innovation in financial space.

Karandaaz has financial and institutional support from the United Kingdom’s Department for International Development (DFID) and the Bill & Melinda Gates Foundation.