AS we have already told you that Nokia in working to launch its most rumored smartphone Nokia X. Now Unannounced Nokia X Spotted with Notch on Nokia’s Official Weibo Page. The company is also sending invites for the launch of this flagship. The launch date set for Nokia X is May 16.

Unannounced Nokia X will officially launch on May 16

According to the rumors Nokia X appears to have a 19:9 screen ratio with a small notch. Now, Official leak has confirmed the notch. The leak revealed that the Nokia X will run Android Oreo. This entry-level model will come with the MediaTek Helio P60 chipset, paired with 4GB of RAM. Nokia X Photos Leak shows the skinny side bezels of the phone. 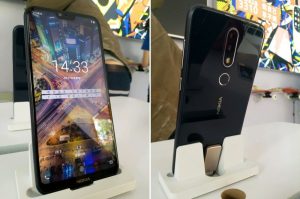 Onsa is a Software Engineer and a tech blogger focuses on providing the latest information regarding the innovations happening in the IT world. She likes reading, photography, travelling and exploring nature. Contact: [email protected]mail.com