In an effort to promote, its web browser – Microsoft Edge – the corporation has begun sending out prompt messages to Windows 11 customers stopping them from installing Google Chrome and instead utilizing the pre-installed Edge browser. This appears to be a desperate effort by Microsoft to get its own browser recognized.

The prompts are available for both Windows 10 and Windows 11, however, just a few people are presently seeing them. Google also attempts to get people to use Chrome rather than Edge by displaying messages when they use its services such as Google Search and Gmail. However, Microsoft’s method is distinct and more visible than Google’s, as the Windows maker displays the prompts directly on its Edge browser. 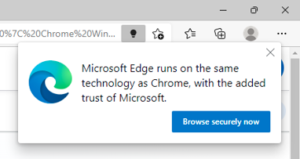 Microsoft’s new warnings arrive more than three years after the firm initially began developing methods to advise Windows 10 users not to install Chrome or Firefox a few years ago. However, those experiments were never made public, but with Windows 11, Microsoft has found another way, which may already be irritating many people. Some of the prompts, which were initially noticed by Neowin, feature phrases such as “Microsoft Edge works on the same technology as Chrome, with the extra trust of Microsoft.” Other suggestions included: “That browser is so 2008! Do you want to know what’s new? “No one ever stated, ‘I hate saving money,’ claimed Microsoft Edge.” “The best browser for online shopping in Microsoft Edge.”

To be fair to Microsoft, Google has also delivered such pop-ups and reminders while utilizing its search engine or other services on occasion. But, at the very least, Google provides the choice to reject such alternatives. In addition to issuing such notifications, Microsoft has made changing the default browser on Windows 11 more difficult than ever before. After downloading a new browser, the user must now pick the default browser for each type of online link.

According to Web analytics platform Statcounter, Microsoft’s continuous methods aren’t helping the company much because Chrome still leads the Web browser market with a 64.04 percent share, while Edge is third with a 4.19 percent share.

You may be also interested in: Honda will Manufacture Electric Vehicles with a New Partner