We all know that Huawei P Smart was one of the mid-range phones by the company that was released in early 2018.  Now, Huawei is all set to launch its successor, Huawei P Smart 2019. The smartphone has already hit the FCC certification. After that, German tech website WinFuture published images of the alleged P Smart 2019. Together with that, the website also unveiled some of the key specs of the upcoming handset. Recently, the Upcoming Huawei P Smart was spotted on Geekbench running Android 9 Pie with 3GB RAM.

The Huawei P Smart 2019 was spotted at Geekbench. Let’s look at the Geekbench listings. 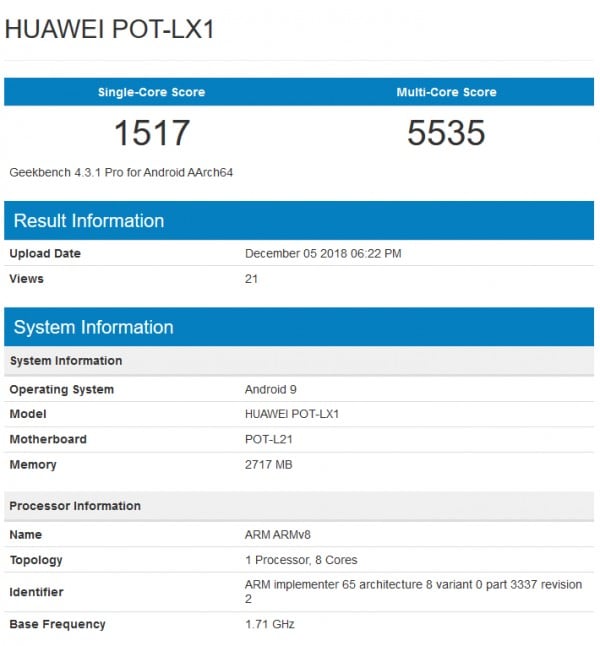 According to the FCC listings, the new addition of P series will show an increase in battery capacity.  Huawei P Smart 2019 will come with  3,320 mAh battery capacity. Keeping in mind the need of its users, the smartphone will exist in no less than four versions depending on the number of SIMs and amount of internal storage. Single and dual-SIM variants will also be available. Together with this, 32GB and 64GB storage options are in the works as well. Furthermore, there will be 3GB of RAM on board as well.

The Huawei P smart 2019 will have 13 megapixel and 2-megapixel dual camera set up at the rear along with a 24-megapixel front camera and 5.65 full HD display. We may expect some better specs in the upcoming device. The Company has not revealed any official information regarding the device. However, we will update you when we will get to know more about this phone. It is expected that Huawei will announce the phone in this month or near CES 2019 which will Kick off on January 6. So, the Huawei P Smart 2019 Launch date is not too far. Let’s wait and watch what comes next.