We all know that Facebook changed its name to Meta back in October. Facebook’s attempt to rename itself is actually aligned with its focus on building the metaverse.  CEO Zuckerberg clearly sees it as becoming a reality sooner or later. However,  Ethereum co-founder Vitalik Buterin does not believe that Mark Zuckerberg’s Meta is “going anywhere.” According to him, Facebook’s Metaverse will misfire.

The metaverse is said to be a blend of offline and online experiences in an interactive digital space. It will be a space where social interactions and transactions can occur simultaneously according to the company. However, Ethereum co-founder Vitalik Buterin doesn’t believe that any of the existing attempts by Meta to create a metaverse are “going anywhere”. He further points out that Metaverse will only “misfire.” Vitalik Buterin recently responded to a tweet from Dialectic co-founder Dean Eigenmann. Buterin said to him that while he believes that the metaverse is going to happen. He doesn’t think any of the current attempts from corporates such as  Zuckerberg’s Meta are “going anywhere.

“We don’t really know the definition of ‘the metaverse’ yet, it’s far too early to know what people actually want. So anything Facebook creates now will misfire.” 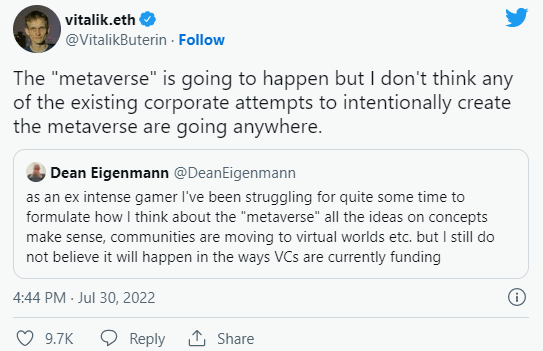 According to Meta’s own definition, the metaverse will allow the users to hang out with people who are not in the same physical space. The company stated that:

“You’ll be able to hang out with friends, work, play, learn, shop, create, and more. It’s not necessarily about spending more time online — it’s about making the time you do spend online more meaningful.”

Metaverse developers like Decentraland and The Sandbox have aligned together with several Web3 projects to launch the Open Metaverse Alliance.  It will focus on building more transparent, decentralized, and democratized metaverses. MSF is also striving to establish standards for a more open and interoperable metaverse. Meta, Microsoft, Nvidia, Alibaba, Unity, and Sony are among the 35 tech companies which are members of the MSF.