Vivo S7e 5G mid-range phone was recently discovered in a Twitter leak. Two photos claimed to display the specs and designs of the rumored smartphone has been tweeted by a popular tipster. The picture indicates that it may be part of the smartphone series Vivo S7 5G. The phone’s name is Vivo S7e 5G. The picture of the tipster reveals the phone with a triple rear camera setup. No details about the launch of the phone are available.

The reported Vivo S7e 5 G features a 6.44inch full AMOLED HD+ display – similar to that of a standard Vivo  S7 phone, according to a tweet by Digital Chat Station. The display includes a water drop, a 60Hz refresh rate, and a screen-by-body ratio of 90.1 percent. 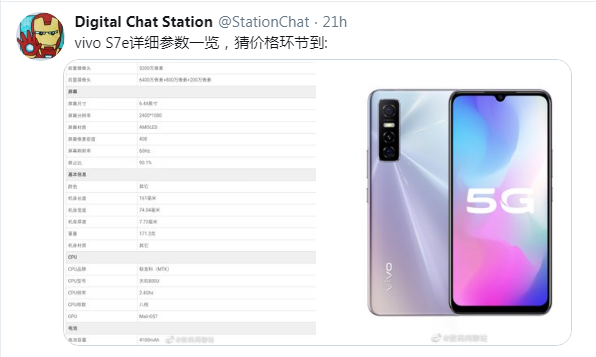 The hood is said to have a MediaTek octa-core 800U SoC clocked at up to 2.4GHz in the hood, and combined with a Mali-G57 GPU for graphics. The RAM and storage options are currently unavailable.

Vivo S7e 5 G is fitted with a triple rear camera with a main 64-megapixel sensor for images and videos. An ultra-wide 8-megapixel shooter and a 2-megapixel depth sensor are said to join the main camera. The mobile is expected to have a 32-megapixel front-end snapper for selfies and video calls. The picture reveals even that the smartphone packs a 4,100 mAh, but no details on the charging technology are received.

The picture in the tweet does not show a fingerprint sensor which would have the phone to operate with a fingerprint sensor on the display. Include 5G networking options. The size of the Vivo S7e 5G lists 161×74.04×7.73 mm and weighs 171.3 grams. But still, no launch detail and complete specs and price are uncovered.

You also may be interested in Sleek design with Extraordinary photography! Is the latest buzz word for vivo&#8217;s premium flagship V20 series?