The Vivo sub-brand iQOO is preparing to launch its next flagship smartphone pair, the iQOO 9 and the iQOO 9 Pro. According to a leaked poster that appeared in China today, they will be made public on January 5th during an event. Following several leaks and rumors, Vivo has finally chosen to reveal the design of the much-anticipated gaming-focused iQOO 9 smartphones. The company’s official photos suggested that the iQOO 9’s back design will be distinct from that of its predecessor, the iQOO 8 series.

According to recent reports, the corporation will also conduct a sponsored gaming event centered on this future technology. The retail price is not confirmed yet. 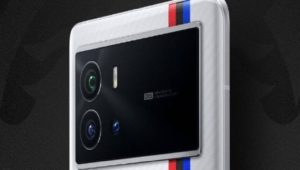 The smartphone will have a 6.78′′ Full HD+ E5 AMOLED display with relatively narrow bezels around the perimeter and a refresh rate of 120 Hz. The punch-hole cut-out for the 16MP selfie camera will be located on the display.

The back of a smartphone with a slightly protruding camera island. A triple-lens configuration will be used on the camera island. While the specifics of each lens have yet to be published, the language on the camera configuration confirms that optical image stabilization will be included (OIS). Furthermore, the volume and power buttons will be located on the device’s right side.

The phone is white, with a vertical strip of the BMW logo and iQOO branding at the bottom.

The Qualcomm Snapdragon 8 Gen 1 processor will power the iQOO 9.

This phone will be powered by a 4,700mAh battery with 120W fast charging capabilities. 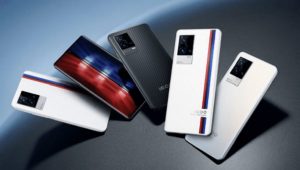 The phone’s main features will include an optical in-display fingerprint scanner, two x-axis linear motors for improved haptic feedback, and a multi-speaker arrangement.

Also read, According to the World Bank, Pakistan Is Not Ready For 5G