Vivo is the company that always comes up with amazing smartphones, recently released the Y15s, and the company has now added a new member to the Y series, the Vivo Y76s 5G. Vivo has sneakily released a new handset in the Y-series. The Vivo Y76s has made its first appearance in the company’s home market. The handset has a quick charging capability as well as a 5 g networks SoC. The Vivo Y76s has been released in China. It is the most recent addition to the company’s Y-series handset portfolio. Just before release, the specs and renderings of the Vivo Y76s were leaked online. The gadget is priced in the mid-range. The Vivo Y76s has a 5G supporting MediaTek chipset, two back cameras, an edge fingerprint scanner, and compatibility for fast charging. It also has an FHD+ touchscreen and is available in 3 different colors. 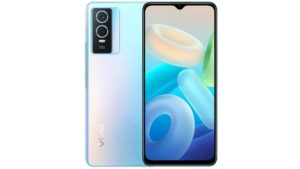 The Vivo Y76s has a 6.58-inch Lcd screen with an FHD+ resolution, a refresh rate of 60Hz, and a waterdrop notch on top. It has an edge fingerprint scanner that is incorporated in the start button. A rectangular camera structure is housed in the rear panel, which has a gradient pattern. On the photographic front, the Vivo Y76s has a dual rear camera configuration that includes a 50MP primary sensor and a 2-megapixel macro unit. The handset sports an 8-megapixel selfie camera on the front and a face unlock function. The Vivo Y76s is powered by a MediaTek Dimensity 810 CPU and 8GB of RAM. It is available with data storage capacities of 128GB or 256GB. For extra storage, the gadget contains a microSD card slot. The Vivo Y76s is powered by a 4,100mAh battery that supports 44W rapid charging. It is powered by OriginOS 1.0, which is based on Android 11. The Vivo Y76s has dual-SIM, 5G, a USB-C connector, a 3.5mm headphone jack, WiFi, Bluetooth 5.1, and GPS connectivity.

You may be also interested in: Spotify Now Makes Things Simpler to Block Other Members and Sets Linked Devices on Auto Play