Whether you are a marketer on Reddit or you have the habit of sharing some amazing things for any other purpose, your Karma lets people know that what kind of Redditor you are. So basically, Karma is Reddit’s voting system. A user having some posts with more karma will be shown on the front page of the platform.This overall process is quite transparent and Reddit itself tracks how much karma each of the users has earned through some automated algorithms.

Having said that, Reddit is the community for communities with so many subreddits that no one can believe. These Reddits are catering to everyone’s needs and it also allows you to give feedback to each other. In this way, the posts with the best comments become more prominent and Karma on Reddit is the best form of feedback.

While many people are trying for monetary methods to earn karma, it should be noted that the only method that is available is for free karma on Reddit .

What Is Reddit Karma and How it is Calculated?

Reddit karma is explained as a scoring system for users that works by totaling the number of upvotes with respect to downvotes. Though it is all about reputation, but it also allows you to start your own subreddit or join some other communities according to your own choice.

A user with high karma scores means that their posts are liked among the communities and viewed as authentic material among the community. A low or negative karma gives a very bad impression and shows that any kind of interaction from the respective user is not like by users or upsets them and actually gives an idea that might be the user is spammer, troll, or a bot. 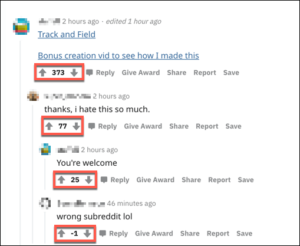 There are two types of Karma that are considered for total karma score, one is post karma and another one is comment karma. It means if you are looking to boost your karma score, you can either concentrate more on comments or posts however to gain results fast, one should keep on working for both of them.

Yes, it feels great to have a six-figure score under your name but this is not the only benefit karma can do. It has several more benefits listed below:

When you are new on Reddit, you have to wait before posting again and there is a limit to posting as well. However, when you earn karma, you can post and comment as much as possible as the limit automatically goes away.

There are many subreddits that need minimum Karma to join them or post there. So in such cases, karma really gives you privilege. For example, if you want to visit r/CenturyClub you need at least 100K Post or Comment Karma.

Earning trust is one of the most difficult things but not with karma. With Karma, one can enjoy more credibility for the things you comment or post.

By having Reddit karma, one can avoid troubles as Reddit has the policy of bending rules for such users. It means for self-promotion you will less likely to get banned as compared to those who do not have karmas or have negative karma.

These benefits are only useful for a user to keep on using karma however some people earn money by selling their accounts with good Reddit karma or by posting about brands from their accounts.

By now, the way of earning Reddit karma would be enough clear, however many Redditors want to get authentic and famous just in hours which is not possible, however, we can help them pass the overall process faster by giving some tips and tricks.

Like any platform, if you want to earn a credibility badge, you need to post good and authentic stuff. In fact, I would suggest forgetting the Karma and engage with each other making your positive contribution to the app and let the normal course happen. However, if you want to make your dream of becoming a Redditor true, these tactics will be helpful for you.

Find popular subreddits that have millions of people communicating with each other, such as r/funny and r/pics. If you post something there, you can easily reach millions of people and can get a lot of Karma from one post alone. There is also a disadvantage of posting in such a famous subreddit, ie; they are heavily moderated, so posting as a newbie might end up not getting your post accepted so in this case you need to post something unique and interesting.

This is one of the most obvious reasons to get Reddit Karma as your post needs to speak for itself in order to get noticeable. Memes related to viral content is the best way to engage people and photos and videos also have too much potential

This sounds quite obvious, but your post has to be notable in order to get noticed. Memes with viral potential are probably your best bet, as are unusual, fascinating photos and videos. This photo of the skate wheels chair, got 50.7K upvotes in the r/pics subreddit, earning its author a shedload of karma. 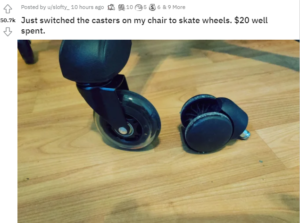 Visit popular subreddits to see what sort of posts fly and are loved by people.  These are the 35 best subreddits that you should follow in order to get Reddit karma.

If you are using Reddit for some time, you would know that there is always some heated discussion going on Reddit. So if you are able to know about some ongoing scandal, or an upcoming movie, or some bad experience regarding any game, it is the best way to communicate and engage the community.

However, there is a catch, try to start polarizing topics as you might get downvoted as well in an effort to earn karma. So don’t, I repeat do not post any unpopular opinion to be a good fist in a pool of bad ones.

For this point, you need to remain online most of the time so that you can actively monitor any new post in subreddits and opt for the one having great potential. If that post goes viral, your comment will automatically go up without doing much.

However, if you are looking to comment on the first post and thinking it might get upvoted, you are wrong, you need to find great and interesting content for that. Relevant GIF reactions in comments get good upvotes. You can also post some sentiment via image or GIF and it can go viral if it relates to other people as well.

A reaction on YouTube video in r/videos scored 45.6K points just because many people could relate to it.

This is considered are one of the easiest methods to earn Karma. r/AskReddit  is one of the biggest subreddit having has some 32,4 million members. So having a community having this much population would be easily engageable. All you need to do is ask a question or answer multiple questions.

Other than karma, it’s a good subreddit to ask questions that you were waiting for years to get good answers to. The questions can be quite basic and humorous as well such as who came first: an egg or a hen?  You can also ask questions related to babies if you are a first-time mother. So there are multiple options for you to decide. If people like your questions and think it is worth replying to, it will add thousands of points to your karma.

Hope this blog was helpful. Kindly share your experiences by commenting below.