Latest critical and disgusting WhatsApp bug has been discovered, that makes users uncomfortable and worried. This latest WhatsApp bug allows blocked users to send messages to the people who blocked them in the first place. While WhatsApp has not publicized the issue and did not take any step to fix it yet.

Moreover, these blocked accounts can see the profile picture, read the status and profile information of those WhatsApp users who has blocked them.

Numerous users of the WhatsApp have complained that people they have blocked are now able to approach them and are receiving messages from blocked members.

This latest WhatsApp bug can be fixed by unblocking the person and then blocked him/her again. 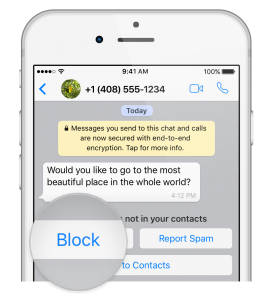 The news and reports of latest WhatsApp bug are widespread across Twitter and other social networks. It has been found on both iOS and Android users, which suggests that the problem is on WhatsApp’s servers.

The app is currently using by more than 1.4 billion people. This latest WhatsApp bug is a   fresh turmoil for the company.

Read Next: WhatsApp for iPhone Now Allows Users to Download All the Data