WhatsApp new features may eventually allow users to mute videos before sending them to a contact or setting them as a status update. The new functionality will be built in the initial stage for Android devices, but in the future, iPhone users could be reached as well. Feature labeled ‘Read Later,’ the iPhone version of WhatsApp now has a new function. This latest deal would be a better version of the Archived Chats features.WhatsApp’s WABetaInfo feature tracker states that for Android, the WhatsApp 2.20.207.2 beta has the capability to mute video before sending it to contact or set as a status update.

A screenshot from WABetaInfo indicates that next to the duration and the video size, users choose to share, and a speaker icon will also be visible. The icon would probably mute the video before being shared by WhatsApp.

The latest function is still in the process and is still not ready for beta testing. However, in the future, it is expected that WhatsApp will be updated live for Android users. WABetaInfo announced that WhatsApp is working on the ‘read later’ feature, which replaces the current archive chats, in addition to the mute video option. The latest feature is confirmed to be included in the iPhone beta WhatsApp 2.20.130.16. 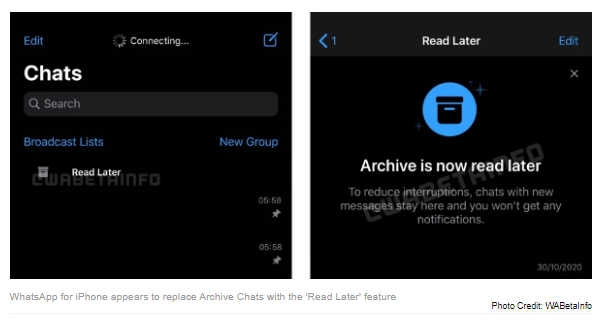 WABetasInfo screenshots indicate that the ‘Read Later’ feature enables users to archive certain chats for which they wouldn’t receive any notifications. An Edit button is given to allow users to unarchive multiple chats quickly. By taping on the Edit tab, you will also be able to make changes to how archived chats work, as shown in a screenshot.

The new ‘Read Later’ feature is intended to work alongside the new, long developed ‘vacation mode’ that stays available to the public. And like the mute video feature of WhatsApp, ‘Read Later’ is said to be in progress and likely to be available for updates in the future.