WhatsApp recently released its new beta update of 2.21.140.11, this new update will change the iOS user’s calls and Group calls interface. The new design is much simpler for users to access the options during a call, a Ring button will be displayed at the bottom of the call screen according to the pictures posted by WaBetaInfo.

The latest beta update will allow WhatsApp users to enter in group calls they may have missed. This feature will works like after upgrading the new version the user can join the ongoing group call if you fail to answer a group call at this time. First, open the WhatsApp window, and then tap on the “Ring” option to join the missed group calls.

This feature will also be available soon for Android beta users. “WhatsApp currently rolling out these features and looking forward to its availability on user WhatsApp Account,” says WaBetaInfo. 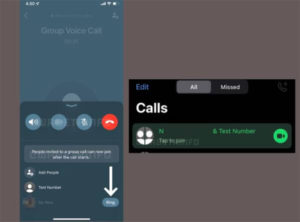 WABetaInfo revealed the information that WhatsApp is also working on a feature to display high-quality previews. Previously, it was revealed that WhatsApp expected to release a larger link preview in conversations.

WhatsApp presently displays previews in four or five lines with a little thumbnail. Comparatively, Telegram shows far better text and bigger pictures, which gives users more insight into what they actually receive, before opening the link. In this situation, WhatsApp shows the normal tiny thumbnails, and not every website supports big previews. This feature will be available in an upcoming update, currently, this feature is under development.

It is importantly noted that the messaging app is constantly introducing new features to enhance its interface and to compete with others.